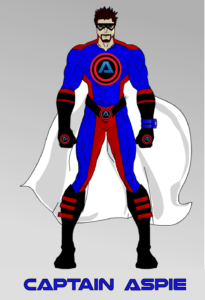 I have a vision for a new comic book super hero squad. Where all the team members have autism and various abilities because of it. None of them are supernatural, they’re based on real people I have met that have unique talents stemming from their autism. And by embracing their gifts and working together, they solve real-world problems and address social justice issues.

So far I’ve got the one who can influence animals, the person who can make an entire group of people feel a certain way, the empath who ALWAYS knows what someone is feeling or if they’re lying, the computer genius, the human google walking encyclopedia, the person who can draw anything they ever saw, the magnet who can always draw everyone’s attention, the person who’ll do anything publicly regardless of what others think, and the leader of the squad who can easily get people to do act in their and the team’s highest good (that’s me ;).

I’m looking for an amateur comic book artist to co-create this with me! I think it could be really popular in the Autism Community and beyond, and would be so awesome to have young, comic-loving Aspies see positive role models of themselves, and recognize that they too can be a super hero if they embrace their gift.